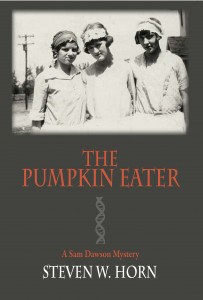 The IBPA, the largest not-for-profit trade organization for publishers in the U.S., announced the awards during the May 28 ceremony held in New York City.

The Pumpkin Eater, the first in Horn’s Sam Dawson Mystery Series, has been recognized by reviewers as a smart start to a new detective series with one of the more likable characters to debut this year.

In the novel, photographer Sam Dawson uncovers a shocking story of undetected mass murders of young women, involving genetic manipulation and the dark history of America’s attempt to genetically improve the human race.

In its review of the novel, Kirkus Reviews said that “Horn (Another Man’s Life, 2012, etc.) has constructed a truly unsettling mystery backed by in-depth knowledge of science, Colorado bureaucracy and politics, and history.” Horn draws upon his background to write a dark, riveting tale.

“Sam Dawson, one of the more likable characters to debut this year, is an RV driving photog with a shotgun-riding bloodhound named Elle,” said Craig Johnson, New York Times bestselling author of the Walt Longmire Mysteries and the basis for the A&E’s hit series Longmire. “Not exactly ten-feet-tall or bulletproof, Sam is one of the guys who breaks cases the old fashioned way-knocking on one more door, checking one more photograph… Climb in with Sam and Elle but hang on tight because you’re in for a bumpy and breathless ride.”

In The Pumpkin Eater, Sam discovers the crime by chance, noticing identical epitaphs on two graves, separated by a thousand miles. While three-quarters of a century have passed since the murders, the tragedy lives on, involving Sam’s long missing sister and his daughter.

Trying to uncover the truth, Sam races to unearth the graves of a lost cemetery and to expose the mass murders of people who were involved in an experiment much larger and more sinister than Sam envisioned. The novel accelerates the suspense on every page while challenging readers to consider politically charged social issues as the novel races toward an unthinkable ending.

“Novels can be more than just entertaining. They can stimulate an emotional response by the reader while leaving them with something to think about long after the book is finished,” Horn said.

Horn explains that, “Writers are urged to write what should not be forgotten. Remembering the forgotten errors of history cannot correct the past. Rather, it may prevent flawed decisions in the future.”

Horn’s compelling debut novel, Another Man’s Life, depicts the reality of Vietnam wartime atrocities intertwined with the guilt that still threatens innocent lives more than three decades later. In an age where many skeptics question the government’s adherence to truth, Horn’s storytelling will shock even the most ardent critic when they read of the political betrayal and ruthless brutality of a U.S. president who convincingly lied to both Congress and the American people.

Kirkus Reviews called it “a memorable debut novel about a life colored by regret and grasping for redemption.”

Horn uses Another Man’s Life to depict much more than the tormented life of a returning veteran. The book examines the complex relationship between a man with a secret and the woman with whom he seeks atonement. His mission of reparation takes him from Wyoming to a farm in Iowa with a secret that threatens the presidency. Horn said, “As in life, the novel crosses genre lines as it moves between the past and the present in a fast-paced, suspenseful story that keeps the reader guessing.”

He is working on the next mystery for Sam Dawson to uncover.

Steven W. Horn draws upon an eclectic array of career experiences in crafting his stories. From high-ranking political appointee and international diplomat to the highest level of academic achievement, his unique background provides grist for the writing mill. A decorated Vietnam veteran and award-winning scholar, Horn writes from experience. Horn lives in Wyoming. Another Man’s Life was his highly acclaimed first novel. His latest, The Pumpkin Eater, is the first in his Sam Dawson Mystery Series and received the Independent Book Publishers Association’s 2014 Benjamin Franklin Gold Award in the mystery/suspense category on May 28, 2014. He is also a category finalist in the 2014 Eric Hoffer Award announced May 12, 2014.

Acclaim for The Pumpkin Eater

“Dramatic and intelligent, this is a smart start to a new detective series.” - Kirkus Reviews

“Sam Dawson, one of the more likable characters to debut this year, is an RV driving photog with a shotgun-riding bloodhound named Elle. Not exactly ten-feet-tall or bulletproof, Sam is one of the guys who breaks cases the old fashioned way-knocking on one more door, checking one more photograph…Climb in with Sam and Elle but hang on tight because you’re in for a bumpy and breathless ride.” - Craig Johnson, New York Times bestselling author of the Walt Longmire Mysteries and the basis for the A&E’s hit series Longmire

“This book is a book that you will want to read from page one to the end in a short period of time and it doesn’t disappoint.” - Lori Lewis, Laramie County Library System, Cheyenne, WY

“The story reads beautifully, great characterization and scenes. Your writing skills are at their best.” – Peter R. Decker, author of Saving the West

Acclaim for Another Man’s Life

“A memorable debut novel about a life colored by regret and grasping for redemption.” - Kirkus Reviews

“ANOTHER MAN’S LIFE is a powerful and factual novel that serves as a wake-up call in the post 9-11 world: When flawed leaders implement policy, the grisly tentacles thread their way into the most innocent of lives. Author Steven Horn takes us to the edge of obsessive guilt before delivering us to greatness. This is a powerful book! We can only hope that a copy rests on the President’s desk.” - W. Michael Gear and Kathleen O’Neal Gear Authors of RAISING ABLE

“The weight of the world is far too much for one man to bear. “ANOTHER MAN’S LIFE” is a novel from Steven W. Horn, as he focuses on Eden Cain, a man scarred by his time at war and the terror that he faced down in the process. For decades he has mused it, and has set himself on ending his own life, in spite of the few joys he has found. “ANOTHER MAN’S LIFE” is a thoughtful and recommended pick, not to be overlooked.” - MIDWEST BOOK REVIEW